THE FOLLOWING IS A PERSONAL ACCOUNT FROM SANTA MUERTE DEVOTEE HANK VINE:

It was early spring, 2016 – I was homeless, unemployed and drifting around the U.S.

I’d just traveled from Minneapolis, Minnesota to the Rio Grande Valley, deep in south Texas where I was crashing on the couch of a friend whom I’d only known through social media interaction. Practically a stranger, and yet this person opened their home to me and taught me a phrase that I now live by:
“Where two can eat, a third can be fed.”

Down and out and staying with a stranger – in an hour of fear, uncertainty, exhaustion and probably a touch of paranoia I found myself on my knees, humbled as never before.

It all started on my way back from Juarez after my father’s death – in a state of visionary excess I had run into her shrines shining on the borderlands, cinder block chapels crammed with offerings and incense. At that moment of weakness and revelation I challenged Santa Muerte to “prove to me this is all real,” and to “humble me and bring me to my knees.” Now that cry had been answered and here I was broken of pride, homeless, jobless, drifting and unsure of where I was going – she helped me fully understand that she was not a hollow New Age DIY deity and whatever delusions I might have were of my own making.

There is no escape from yourself when you’re on the streets – I accepted the reality that was thrust in my face. This was not punishment, it was rebirth.

While working through this crisis of faith and finding myself without home or employment Mexico became an obsession for me and I was haunted by the thought of a Mexican family. A gringo’s gringo from East Texas and here I was dreaming of a life that would have seemed completely alien to me just a few years prior.

True prayer is a silent, wordless, upheaval of the soul/core of a man. I knew Flaca was as real as breath in my lungs, and I asked Her to lead me to a smart, humble, strong woman, un mujer mexicana. A woman capable of slaughtering her own livestock, processing the carcass, using a machete to cut her firewood and cook a meal for her family over an open fire in a kitchen with a dirt floor. A woman that could bring back the strength and dedication I’d seen growing up in rural Texas. A woman who could teach me and travel the hard roads of life with me – a true partner, a true love.

This prayer rose up from the depths of my being, and honestly left me shocked at the images that were manifesting in my minds eye. In return for this prayer I swore an oath and a promise, if the life and family I had seen in the prayer/vision were brought to me, I would dedicate a section of my flesh to her.
So it was I set off on a long and crooked road thru the darkness and into my future, with nothing but a low hazy light in the distance to guide me. However, even a dim light fed daily by prayer and devotion can become a blazing sun. 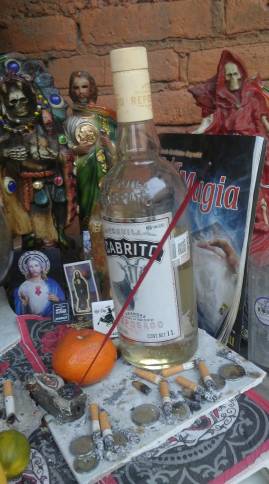 My wife and I rise early to the giggles of our son who turned 8 months old the day before. Diaper change, a fresh bottle, change of clothes, the simple routine of being a parent.

Once Leonardo is settled into his stroller, I go out to the patio and light a cig at my altar, exhaling the smoke from my Jaipur brand cigarettes (10 pesos per pack) – I smoke about half then place the remaining on the broken piece of tile on the altar. Then relight the half of a joint left from the night before, with each long hit, I lean forward and exhale the sweet smoke directly onto each statue.
One hit, two hits, three, four…letting the joint continue to burn, I return it to the piece of broken tile.
My focus at the moment is a 15″ La Negra statue that I had purchased several weeks before. This statue will be a further offering on the journey I am about to take.
Silent wordless prayers as I pack her carefully for the trip…
Teresa and I leave the house, heading to the corner to catch the metro-bus, from there we take a quick walk to a transport truck “un camione.” We pack in like cattle headed for slaughter. Squeezed in tight, we ride for 45 minutes, hop off and walk several blocks to catch a second camione..
This time we’re less cramped, but the van sounds as though it’s jumped the timing belt and there’s an exhaust leak that pours carbon monoxide chokes us half to death. Finally we make it to fresh air and the Buenavista train/bus station. Another 20 minutes on the train, stop at Lecheria station, scale the steps up to street level – at this point I am entirely trusting my wife, because I have found myself in an area of the D.F. I am not at all familiar with.
She scans the swath of transport trucks lining the streets on all sides and somehow ascertains the correct one. She grabs my arm as though I am 5 years old ” Chivo, go go!!!” and we hurry to cross the street.
Another 30 minutes in a tightly packed van that had been an airport shuttle bus in its former life. Pulling up to what seemed like the thousandth red light she motions for us to get out and I hear the driver shout “Chivo!!!” with the tone of “hey buddy” and the first person I see is a familiar skinny kid about 20, with a huge golden Santa Muerte encrusted with gemstones around his neck.  I realized the driver had called out “Chivo!!” because mi hermano de fe was standing at the corner waiting on us. Handshakes, hugs and smiles are exchanged and we begin walking to Casa de Chivo.
Chivo Carrillo is a very dear friend that I made through the Santa Muerte International Temple which was founded by Jonathan Vargas, and raised to international renown by his devoted mother Enriqueta Vargas. Being that we share the nickname “Chivo” we hit it off with humor from the start.
There are those that choose to use Santa Muerte because they see her as a power source, but true power is found in the hearts of those whom she herself chooses, the desperate and the broken and the humble. While I had found la Nina during a time of trouble while traveling in the borderlands between the U.S. and Mexico – Chivo had found Santa Muerte while incarcerated in the U.S. Neither of us had sought her out, she had come to us when we needed her and had opened a door to a new life of faith and devotion.
We arrive at my brothers home and he introduces his lovely family to my wife and I. Hospitality in Mexico is very much akin to the hospitality found in the southern U.S. 75 years ago – proper introductions made, it was now time to get down to business….
First I offer the gift of the La Negra statue to my brother and she is given an honored place to watch over the events to come. Chivo preps all his tattoo equipment and educates me on set up and safety standards.
Here we go….

The area of flesh to which I offered to Flaca for the countless blessings she’s given me these past 3 years will cover an older tattoo that represents a stage in my life that had long since passed – it might surprise you in reading this when I say that Santa Muerte now covers runic inscriptions that I’d got during a period in my life when I was active in white nationalist groups. It’s a stage which I left behind long ago and one which I am not proud of, yet without it I would not have been prepared for the journey that brought me to this moment.

This journey to visit my brother of faith and receive my Madre Sagrada’s image on my flesh is a microcosm of the life journey that has brought me to Mexico.

Faith and devotion to Santa Muerte has taken on more and more of a public image over the last few decades, but to find her essence is a rare thing indeed. It is sitting in a plastic chair choking down the desire to shout “Fuck that hurts!!!” as a fellow devotee marks your flesh in honor of Flaca!

I sat there trying not to squirm as the needle hit bone and sent shock waves thru me like a taser – the memory came back of standing at an open grave as we said our goodbyes to Madrina Vargas, and Chivo slapped me on the back of the head saying simply:

“Be strong brother, no cry.. Mom always smiled, we will smile thru our pain as she did.” 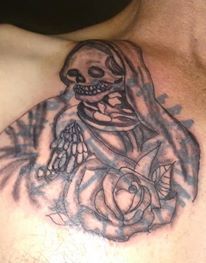 Temples are beautiful, groups can give a sense of identity and belonging, but the few who are chosen know that power is found in hidden places, where devotees are equals and where la familia knows the truth of answered prayers and humble devotion.

To quote my fellow Texan, the musician Zebulon Whatley:

“Do unto others as sisters and brothers and surely goodness will prevail..”

Or as I’ve come to understand things:

Without fear, without tears, and with faith…Where two can eat, a third can be fed.

Something as old as the ground she is rooted in – Hank Vine on life and Saint Death in Mexico City – https://davidmetcalfe.wordpress.com/2018/05/11/something-as-old-as-the-ground-she-is-rooted-in-hank-vine-on-life-and-saint-death-in-mexico-city/

Born in Texas, Complete in Mexico: The Testimony of Warren Robert Hank Vine–https://skeletonsaint.com/2017/09/05/born-in-texas-complete-in-mexico-the-testimony-of-warren-robert-hank-vine/