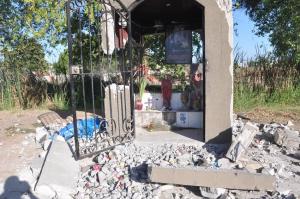 While the targeted destruction of Santa Muerte shrines and altars has been going on for several years in Mexico, over the past few months it’s increased throughout the country. Most of the shrines leveled had been erected on public property, but the latest case of iconoclasm occurred on private grounds in Los Mochis, Sinaloa.

According Mexican press reports, during the night of May 9, 2014, unknown perpetrator(s) partially destroyed the private shrine with a sledgehammer. Municipal police were then sent the next morning to completely raze the severely damaged structure. City Hall was apparently pleased with the removal of the shrine since the press reports that previous administrations, viewing it as a symbol of organized crime, had wanted to level it but couldn’t since it was built on private property.

In an exclusive interview with Skeleton Saint, Enriqueta Vargas, the top Santa Muerte temple leader in Mexico and owner of the giant 75 foot statue of Saint Death, vehemently protested the latest act of iconoclasm against her faith.

“I’ll say it again! In Mexico there is freedom of worship and the government must respect the right of the people to believe in whatever they wish. They justified its destruction (the Santa Muerte altar)  “alleging it promotes organized crime.” If we’re going down the road of justifications, they should also destroy churches because of the pedophilia stuff, and let’s not even talk about those other sects and religions that have checkered pasts. THE GOVERNMENT RULES ON BEHALF OF ALL OF US!”