Devotees of Saint Death March for Life in Juarez, Mexico 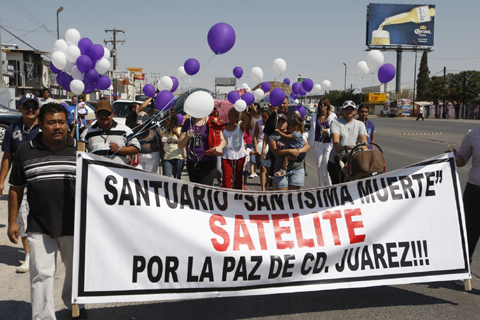 With banners proclaiming “sons and daughters of Santa Muerte for peace in Juarez” some two to three hundred devotees of Saint Death organized a peace march in a city so violent that it recently earned the moniker “Baghdad on the Border.” Departing from one of the border city’s main Santa Muerte shrines, the marchers processed along major thoroughfares both on foot and in vehicles. Believers in the Bony Lady had held similar protests against the horrific violence in their troubled city over the past years, but yesterday’s was noteworthy for its size and enthusiasm. http://arrobajuarez.com/notas.php?IDNOTA=21926&IDSECCION=Portada&IDREPORTERO=De%20la%20Redacci%F3n

Having spent the past five years studying the rise of this, the fastest growing new religious movement in the Americas, I was shocked to see press coverage of the protest. Scouring the internet for Saint Death-related news has become a morning ritual that is usually filled with stories from the Mexican press implicating the skeleton saint in acts of narco-violence.  Murder victims found with Grim Reapress tattoos, kidnappers arrested at safe houses with her altars, and narco-guns embossed with her skeletal image are my standard early-morning reading fare.

So in the context of not only Mexican but also global media reporting almost uniformly on the Skinny Girl (one of her common nicknames) as a narco-saint who blesses and protects the myriad agents of death in Mexico, it was stunning to come across the news of the Santa Muerte peace march this morning.  Citizens of Juarez who venerate the Angel of Death protesting the violent deaths of their fellow Juarenses provides a poignant, if fleeting, counterweight to the vapid musings of the likes of Anthony Bourdain.  In his recent Mexico episode of Parts Unknown he declared, “Holy mother of Santa Muerte, please protect my stash of cocaine. Let it not be interfered with by the cops, or the competition. Let any who would mess with me be killed. My enemies destroyed. Please forgive us our sins, for they are many.” The Skeleton Saint undoubtedly has such devotees who wish death to their enemies, but she also has many more, such as the brave devotees of Juarez, who march for life.