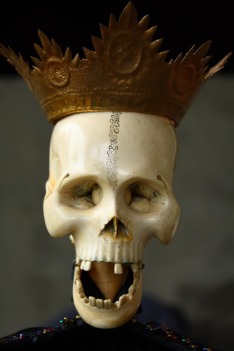 As a specialist in Latin American religion I suspected that sooner or later my research would take me to the Philippines, which was also colonized by Spain. However, I thought it would be the burgeoning Catholic Charismatic Renewal that would lead me there since I had done research on the dynamic movement in Latin America. So when I started research on Santa Muerte six years ago, I had no idea that it would take me to South East Asia, much less beyond Mexico and the US.

As it turns out, the Philippine case is crucial to a larger understanding of the historical development of the wildly popular folk saint whose devotion is now the fastest growing new religious movement in the Americas. Perhaps the most fascinating aspect of King Death or La Muerte (Santong Kamatayan in the Tagalog language) is that he is still part of Holy Week processions in several Filipino cities, most notably in Argao. Click here for stunning images of the unique statue carved from ivory. Doña Sebastiana (go here), the Mexican predecessor of Santa Muerte, used to be an integral part of Holy Week activities in colonial Mexico and 19th-century New Mexico and Colorado, but now it would be unimaginable in Latin America given the Vatican’s recent condemnation (go here) of Santa Muerte as “anti-religion” and the poster girl for the “culture of death.” Claims are made that King Death is merely a personification of death, a la the Grim Reaper, and as such is not venerated as Santa Muerte, San La Muerte and Rey Pascual are in the Americas. As part of my field research, I plan to investigate these claims and determine if in some cases representation has morphed into veneration of Santong Kamatayan, who appears to be employed in Filipino sorcery as well.

Beyond the King Death of Holy Week processions and sorcery, there is a growing community of Santa Muerte devotees centered in Manila. The most prominent devotee is a Japanese-Filipino whose home altar is attracting more devotees by the day. While he refers to her as Santa Muerte and includes practices similar to Mexican devotees, the articulate young devotee has also incorporated elements of Filipino folk religion, which is a syncretic mix of pre-Christian practices with non-institutional Catholicism. I’m looking forward to exploring all of this firsthand as I head to the Philippines for field research in July.

One thought on “King Death: Santa Muerte in the Philippines”