“Pray with your heart to Santa Muerte”: Arely and the August Anniversary of Holy Death, Queens, New York, 2022

On the 26th and 27th of August in Queens New York, Arely Vazquez transgender leader and pioneer of Santa Muerte USA will throw a massive fiesta in honour of Holy Death. All devotees and those interested in Santa Muerte are welcome, states Arely, and in return for a donation at the door can expect entry to a spectacular event that will feature prayer, mariachi music, shows by Arely and two other transgender performers, as well as delicious Mexican fare and dancing into the night before the beautiful skeletal figure of Saint Death garbed in a ball-dress to die for.

Arely has been a devotee for 20 years. Although she grew up in Guerrero and had heard of the folk saint in her home country, her devotion to death began in the US. She left her home to find fresh pastures and new opportunities. Soon after a friend gifted her a small statue of Santa Muerte. Immediately, Arely felt a strong connection to the folk saint who immediately blessed her with many miracles. But the most powerful miracle of all, was after four years of devotion when Arely fell very ill. The doctors stated that she required immediate pancreatic surgery. Arely did not know if she would survive. She prayed fervently to Holy Death for healing. The operation went without a hitch and miraculously Arely was back on her feet in no time. While her devotion before had been private, intimate in nature, and she had only revealed her faith to friends, Arely was so grateful to Death for life that to thank her, Arely decided she would throw a lavish, public party in Santa Muerte’s honour, “un anniversario”, as she described to me, a birthday party.

The party she decided would be held in August, not only did the month coincide with the ancient Aztec celebration of death but it marked one month after the successful surgery. Arely began organizing everything. A keen cook she decided she would rustle up many Mexican delicious delicacies, such as mole. She also had a transgender friend who designed exquisite dresses and decided to clothe Arely’s large effigy of Santa Muerte in a glorious gown. Next, she needed to find a location. It was not easy, but Arely knew a local Latino who had a restaurant with a side room that just might be suitable to hold her fiesta. Her friend was unsure, construction had not finished in the side room and the walls were rough concrete and the floor unfinished. Arely told him not to worry, she would take care of everything. Within a few weeks, the barren room was transformed with kaleidoscopic and colourful decorations, and above all love, into a sumptuous event hall. All Arely needed to do was to advertise her event.

She reached out to her local botanica, a large store with many patrons, hence she hoped her posters on their wall might reach devotees in New York but really had no idea what the outcome would be. The night came for her anniversario for Santa Muerte and she waited anxiously in the party room with her husband, unsure if anyone at all would show up. To her surprise people started arriving in droves, until around 60 people filled the room, delighted to be able to partake in prayer, imbibe melodic mariachi music and devour a feast in honour of Santa Muerte.

Since that time Arely has thrown her anniversario every year for Santa Muerte and the event has become renowned among devotees, many come miles to attend and as Arely tells me “it is like we are in another country, another world”. The celebration no longer takes place in the side space of a small restaurant but instead in a large event hall able to accommodate the hundreds of pullulating people. “The event attracts such a diverse array of devotees, from families, to couples, and members of the LGBTQ+ community. And we get all nationalities too, not just Mexicans, people from El Salvador, Ecuador, Colombia, but also Middle Eastern people, Indians and White Americans attend. And interestingly we also get people of other faiths who are interested in Santa Muerte, such as Hindus and Evangelicals, who come to learn what it is all about,” Arely tells me.

For devotees this year, Arely has organized another spectacular celebration for her beloved folk saint, including scrumptious Mexican food, beer, three mariachi bands who will sing to honour Santa Muerte, as well performances by Arely and two other transgender devotees. On Friday 26th August there will be religious ceremonies including consecration of effigies which will be blessed, union of marriages and a prayer service. On Saturday 27th August at 7 in the morning Las Mañanitas (Happy Birthday) will be sung to Santa Muerte and breakfast will be served. In the evening the party will start at 6pm at 59 15 37 Av Woodside Queens, 11377, N.Y.

Arely has this message for all devotees who petition Death “that they yearn from their soul, that they wish with their mind and that they pray with all their faith from the depths of their heart to Santisima Muerte and their prayer will be fulfilled”. As she expressed poetically in Spanish to me “pido a todo sus devotos que anhelen con el alma, que desean con la mente y pidan con todo su fe desde lo mas profundo de su corazón a la Santísima Muerte y se les cumplirá.”

I obtained my doctorate in Anthropology from Oxford University, where I also acquired my MPhil. I am one of the world's leading experts on Santa Muerte, one of the fastest growing new religious movements in the West. It is my life's mission to record and document the stories of Santa Muerte devotees, in particular female devotees who I research. I am a pro bono board member of Uganda 4 Her uganda4her.org is a non profit organisation that aims to empower and educate girls in Africa, to ensure equal rights. View all posts by KKingsbury

3 thoughts on ““Pray with your heart to Santa Muerte”: Arely and the August Anniversary of Holy Death, Queens, New York, 2022” 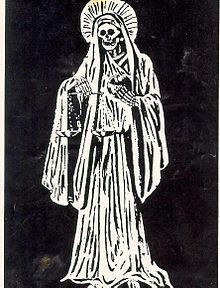 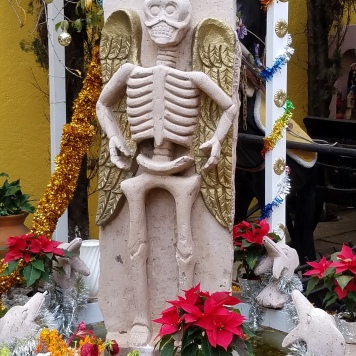 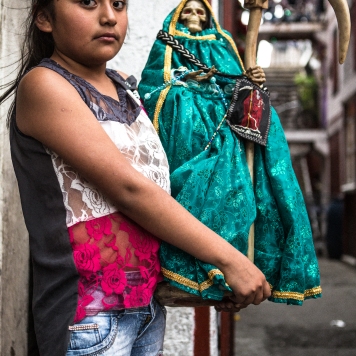