Santa Muerte, My Mother, and Me 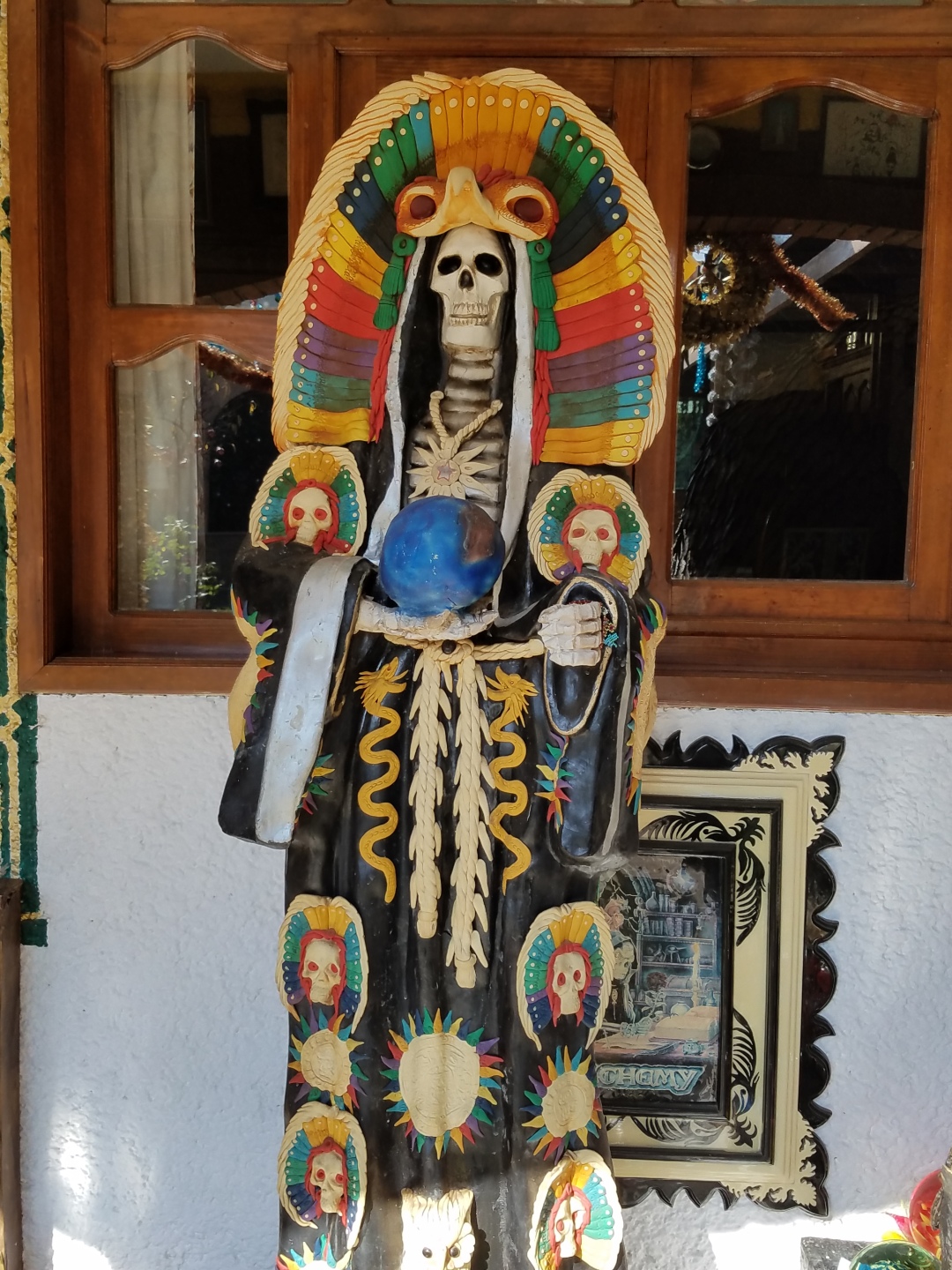 1
I’m an astrologer. I started blogging in 2011 as a way to attract clients. Blogs were business cards back then. Less so today.

And I named my site Moon Pluto Astrology because in my natal chart (that thing astrologers analyze to figure you out), I have my Moon and my Pluto not only in a conspicuous place, but fused together. It matters.

Quick astrology lesson: the Moon is mother and Pluto is death. Mother Death. How my mother died: young. She went into the hospital and she didn’t come out.

But about the Pretty Girl, who is the subject of this blog post: I have no miracle stories for you — except that people continue to live after their mothers die.

2
I have said it out loud, about her, the White Girl: she is my mother. I have said it out loud: help me. I have said out loud all kinds of things in desperation, and I have sent out my magic like a flotilla of bad boats, and I have taken my magic back at times (this can be done, believe me), and for the most part without asking the Bony Lady for anything except one gory year on Staten Island  when my marriage was dying.

I said this about my mother to a friend who was telling me about her mother’s vociferous texting habits.

If you are wondering about the difference, the texture, the thickness between life and death, here and there, it’s more of a wall not a veil (that veil the Pagan bloggers write about at Samhain time, how it grows thin), but if you’ve ever attempted to grab the dead then you know that you can storm this wall and you can get through. I’ve written about this before. Saint Death is death personified they say, but for me she is the Storm, which is a verb not a noun in this case.

4
I have mixed feelings about writing here. One, I am private in my spiritual practice. Two, how can I call myself devoted to the White Lady when I do not currently have an altar or candles of any color.  The world came into being because God spoke (says the Torah). The world didn’t come into being because I bought a candle at the bodega downstairs. Magic, like art, is creating what didn’t yet exist.  Maybe your colluder is the wind. Maybe a hummel figurine. Maybe your dick. Maybe La Flaca.

My love for her exists in my mouth and my heart, which is a very Jewish thing as opposed to a thing thing, like a candle that gets activated.

Did I have a candle once? Yes! I lived in a mostly Mexican neighborhood and the Powerful Lady was as easy to find as Jesus, as onions. My Tinder profile, had I had one, could have said something like: Aliza enjoys Manhattan diners,  walking for hours up Seventh Avenue, and blood magick, lots and lots of blood magick.

5
So on Twitter I say this “my mother is too dead to text” thing and within a minute two women show up to say the same. Their mothers are also dead (I don’t mention my dead father, I keep it simple), and I make the obvious joke about a club no one wants to belong to.

Some day your mother will die is what I want to say to everyone who shares their perfect mother filled existence with me. Someday she will die and you will break. You will know what I have known for a long time now. You will catch up. In Gan Eden, it was the Tree of Knowledge that fucked everything up. Not the Tree of Life. I’m certain of it.

6
Like others, I can tell you a story of her calling me, yes like on the phone (no call waiting for the Lady of the Shadows) although the truth is I was probably watching YouTube.

When she found me, I had been learning about Wicca, but I’m not a nature girl. Who was I trying to kid? Even the phases of the moon confuse me. And then I dipped into traditional Witchcraft, and I’m from Miami so I was remembering the Santeria stories of my childhood, and also during this time I kept running into shamans and Paleros, like the helpful stock boys at Key Food. They were everywhere, asking me: did you find what you were looking for?

And there she was. Not Isis, not Bast, not Papa Lega, not Yemaya, not the Lubavitcher Rebbe. Two holes for eyes. Holy Death. Darkness upon the face of the deep.

When I was in college, I had a friend who obsessively watched this one television preacher and got born again.  Was this that?

8
Like I wrote at the start, I have no miracle stories for you. None that I can share anyway. Sometimes on social media I will proclaim: I am not your love and light astrologer! That I come from the jaws of hell — no, the bowels of hell — wait! –t he jaws and the bowels, even before my mother’s unlucky passing. My Mother Death.

So what I want  to say in closing is that if you, too, have such a mark on you, like Cain, if you too come from the jaws and the bowels, if you find yourself there now, if you were born broken into, you may slowly fall into her bony arms. Or maybe, just maybe, she’ll reach out.

*Aliza Einhorn, author, astrologer, tarot card reader, poet, and playwright, holds a MFA from the Iowa Writers’ Workshop. She is the author of The Little Book of Saturn: Astrological Gifts, Challenges, and Returns, which is hot off the press with Weiser Books. Aliza blogs at her website MoonPlutoAstrology, and does readings professionally. A former New Yorker, she now resides in Florida. Follow her on Twitter.

8 thoughts on “Santa Muerte, My Mother, and Me”