Why Would a Belgian Follow Mexican Folk Saint Santa Muerte? 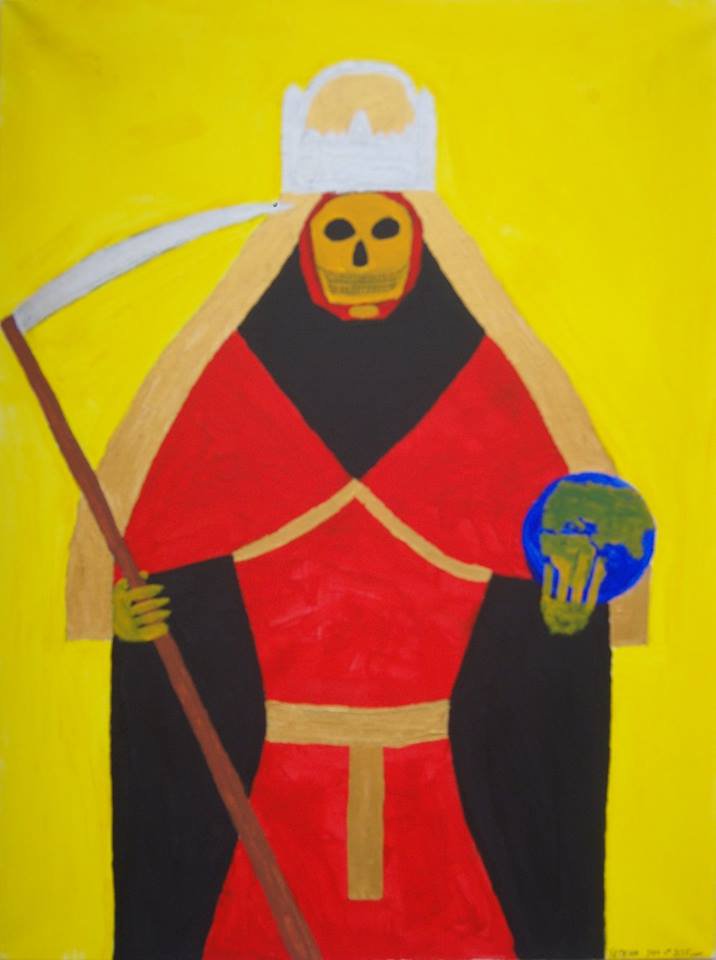 Devotion to Santa Muerte has been spreading like wildfire across Latin America and parts of North America so it’s not surprising that it also has made the leap over the ocean and has reached Europe. While probably most devotees here will be of Latin American descent, it is spreading beyond this community.

I myself came in contact with Santa Muerte in 2012 or 2013, as she was portrayed in an episode of a paranormal or ghost show on television. My interest was sparked and I went on the Web, to learn more about the Bald Lady and devotion to her. Unfortunately most web sites or information were in Spanish, a few in English, which at least gave a first glance.

It was the beginning of a fascinating part of my life. I always had an interest in religion, the paranormal and the occult, so I did try to gather as much information as possible, though it wasn’t a complete devotion to Santa Muerte from day one. The first years for sure were like an on and off relationship, as the contact didn’t really work great. It was only at a later date that I realized my mistake, I was following to much information, prayers and rituals of third parties, while I had to look for my own connection to the Skinny Lady.

For about 15 years I was responsible for a small Traditional Catholic community, something I enjoyed greatly for about the first 10 or 12 years, but then it became a drag. So when circumstances forced us to empty the space we had used as a chapel, it was like a liberation for me. For some years I looked for an opportunity to continue with my pastoral path, but I couldn’t find the right path to follow, so I just waited and saw what was coming my way.

In the end it was Santa Muerte, for now she is a part of my life, and I have found my own way to combine parts of my traditional catholic background and devotion to her. It wasn’t so easy to work it out, but piece by piece it showed itself. Mass is still a large part of how I work with her, in which I employ the Tridentine Mass in an adapted form. Most of the prayers remained as they are in the missal, but some were slightly adapted to honour Santa Muerte. And in this way  it is also possible to bring other workings into the first part of mass where normally there would be space for the epistle, gospel and sermon.

For some it might look like a strange combination, but it works for me and that is the main point. And I am also convinced that many will scratch their head, wondering why people from Belgium follow a Mexican folk saint, but in the end it’s Santa Muerte who chooses her devotees, not vice versa. She will make the initial contact, which can come in the most peculiar ways, and then it develops further, though Santa Muerte has a caring and gentle aspect, she can also be very tough, and test devotees if they really want to follow here, or if they are just taking her for a hike, and forget about her, the first moment, they no longer need her. The Bald Lady knows that very quickly, and if one doesn’t take devotion to her seriously, one can expect a strong reaction, for her hand can heal and bless but also can also hurt and curse.

La Madre doesn’t discriminate, once she has accepted a devotee under her mantel, she will not abandon them. Though if the devotee themselves should turn their back on la Santa, then one can expect a strong reaction, though it is not always so, sometimes the devotion just fades like a candle that goes out in the wind and that will end the connection between the Skinny Lady and her devotee.

It is a very interesting and rewarding path to follow. It is impossible to explain it in depth through words, as it is something one must experience first hand. Only as such will it become clear what a powerful lady our Santa is, and what she can do for us if we are really devoted to her. For those who want to learn more, find information for yourself, don’t listen to outside voices which tell you not to follow her, but with an open mind see what comes your way, and I wouldn’t be surprised if Santa Muerte will also become part or you life.

*Since a young age I was interested in religion, the paranormal and the occult, which led me to explore very different paths, some New Age elements, some very traditional. I gave courses in Chakra healing from about 1989, was consecrated in January 1995 in the Caro succession (Independent Catholic), and knighted in December 1998 in the lineage of FAR+C and the Pauvres Chevaliers du Christ. I was pastorally active from 1994 to 2010, during recent years I only help out where asked or needed. Follow me on Twitter.