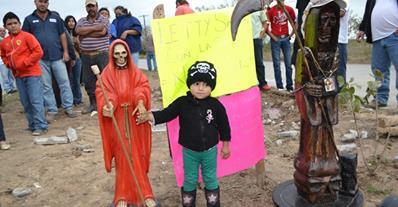 Leticia Salazar Vazquez, Mayor of Matamoros, a town on the border of the United States and Mexico has ordered military action against a chapel dedicated to Santa Muerte which has been in operation for approximately 4 years. Reports indicate that Mexican military forces have been working since Thursday, January 9th, 2014 to demolish the worship site after the Mayor paid a brief visit on Wednesday during a tour of the area.

According to one report on the Spanish language website Contacto (Click Here for the article,) the residents were met with ‘the sound of a truck, a backhoe and the arrival of several trucks…being proceeded by municipal order to destroy the sanctuary from the ground up no trace of it.” Approximately 70 residents are reported to have staged a protest against the actions as the icons and statues from the chapel were carried away in trucks and the site itself torn down.

Residents who support the chapel have been quoted as saying that the Mayor should focus on paving the streets and bringing elecricity to the area rather than stifling their religious freedoms. Warnings have also been issued by devotees that Santa Muerte “is not one to mess with.”

On Saturday, January 11th, the demolition continued with the destruction of a shrine built under the bridge across the Avenida Roberto Guerra (Click Here for the article in Contacto.) Reports indicate that two smaller effigies were smashed, while a larger one was taken away. Some eye witnesses also stated that they saw some of the demolition crew looting the offerings left at the shrine.

Dr. Andrew Chesnut stated on Twitter that ‘This is the most significant Santa Muerte shrine demolition in Mexico since March 2009 when the Mexican Army bulldozed 40 on the border.’  The current mayor of Matamoros is a member of the Partido Acción Nacional, a group know for its strong support of the Roman Catholic Church. The demolition of the border shrines in 2009 was initiated by Mexican President Felipe Calderón, another PAN party member.

News reports of the destruction of the chapel in Matamoros, as of Saturday, January 11th, remain solely in the Spanish language news without even a brief mention in English through the Associated Press or other syndicated news sources. In reaction to the demolitions La Madrina Enriqueta Vargas, leader of the Santa Muerte Temple in Tultitlan, said that “the mayor of Matamoros clearly broke the Law of Religious Liberty” in razing shrine. Steven Bragg, who hosts the Chapel of Santisima Muerte in New Orleans remarked that “It’s always the poorer people who have real devotion & faith who suffer,” reflecting the residents whose concerns for proper roadways and electricity are in stark contrast to the substantial costs of paying for Mexican military forces to demolish a chapel. In a similar light Bragg also mentioned the razing of Vodou temples during the early part of the 20th century in Haiti by government forces during campaigns to assert control over the populace using symbolic gestures such as the destruction of faith centers during ‘anti-superstition’ campaigns.

A story that ran on the Tribuna website on December 31st (Click Here for the article) may give some indication as to the reason for such drastic action. Reporting on assaults on three Catholic priests in the Matamoros area, the article goes on to say that:

“Recently, it was also learned that another priest of the parish of the Good Shepherd was brutally beaten with bat for refusing to officiate a Mass in a chapel dedicated to Santa Muerte. The prelate is in hospital with serious head injuries.”

Unfortunately the article does not go into detail regarding the event, and incidents such as this have been widely misinterpreted in the media as representing anything beyond the actions of individuals who are outside of the tenets of the de-centralized devotional tradition. In a Spanish language news piece from the Russian website La Voz de Russia (The Voice of Russia) the details of the Matamoros event are obscured in a short, and inaccurate, news blurb relating her devotions to human sacrifice. The article titled, Adeptos de la Santa Muerte se declaran a favor de los sacrificios humano (Followers of Santa Muerte are in favor of human sacrifice) (Click Here to read) demonstrates the level of absurdity that some of the recent media coverage has attained in attempting to market a fear based approach to the growth of her tradition.

Martin George, one of the most vocal leaders of the tradition in Mexico City, along with La Matrina Vargas, Dona Queta and others have consistently and without question condemned not only human sacrifice, but also animal sacrifice and any other forms of worship that violate the sanctity of life. Isolated violence and extreme actions taken by individuals associating themselves with Santa Muerte is one of the most important reasons that clarity on the subject should be a prime focus for journalists, authorities and media groups covering the tradition, as their clarifications help to mitigate misunderstandings that can lead to tragic consequences.

Santa Muerte continues to be a key figure in politicizing issues surrounding poverty, violence and drug trafficking in the Americas, making an easy target for groups who want to use her devotional tradition as a scapegoat to highlight immediate and visible actions against more amorphous elements within society. In Matamoros we seem to be seeing a situation in which military forces have been called in to retaliate for recent violence against representatives of the Catholic church. Such a display demonstrates the complex political situation in Latin America (and around the world) with the powerful forces of the government, cartels and religious organizations vying for control over the area, along with foreign powers such as corporate entities and NGO’s playing silent partner to each groups machinations as it fits their own profit margins and social agendas.

The complexity of the situation also highlights just how impoverished contemporary media is, and how it is unable to fully function as an organ of sight into the true drivers of social change. Unfortunately, in the midst of dramatic actions such as those taking place in Matamoros the reality of Santa Muerte devotional tradition and its centrality to many community oriented groups that are working to solidify social relations is lost. Also lost is the opportunity to network and dialogue with Santa Muertistas who are actively working within their communities on a day to day level to support healthy growth, and who are often strong leaders such as La Madrina Enriqueta Vargas, Dona Queta, Martin George and many other local figures who support the faithful in one of America’s fastest growing popular devotional traditions. Instead we have a mediated spectacle that covers up the power plays of social forces that would rather remain discreetly in the shadows while the figure of Santa Muerte is presented as front for the violence and confusion that remain one of the main tools of power and oppression around the world.